“Where Delaware Comes Together” 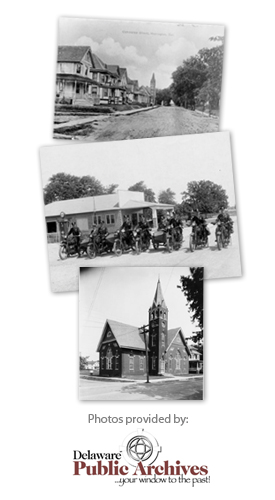 Before it was Harrington, the area was known as “Clark’s Corner”. It was fashioned out of about 6,000 acres of Mispillion forest, an enormous stand of trees that covered most of Kent & Sussex counties.

In 1780, Benjamin Clark, a descendant of the area’s first European settlers, built a home and tavern at the corner of what were then the Frederica and Milford roads. The tavern became a stop for stagecoaches; farmers came to exchange news and barter their goods. It was a logical place for a railroad stop when the Delaware Railroad put a junction there in 1856, allowing easy access to Philadelphia and Wilmington. The railroad greatly accelerated the population and industrial growth of the town. The following year, a post office was established and in 1862, the name “Harrington” was adopted in honor of Samuel Maxwell Harrington, chancellor of the Delaware Railroad.

In 1869, the City of Harrington was incorporated and town limits were defined. Fourteen years later, the Harrington Library was chartered and the first town newspaper “The Harrington Enterprise” was formed. By 1900 there were 4 canning factories in town to process farm products and clothing manufacturers had discovered Harrington. By the mid 1930’s there were a dozen small manufacturers turning out shirts, pants, dresses and underwear for major clothing suppliers around the country. Textile mills in the south and New England shipped pre-cut cloth to Harrington where it was assembled into shirts and pants and then sent by rail to major brand name companies. By the mid 1970’s most of the clothing factories were closed-down and Harrington shifted gears.

In the early 1980’s the city linked city water and sewer service to the industrial park. That allowed the city to attract a lumber company and a box factory.

The Fairgrounds and Harness Racing, two longtime Harrington traditions, are the foundation for the city’s new growth and future development. The Fairgrounds have been an integral part of life in and around Harrington since 1920 when a small group of entrepreneurs started the Kent & Sussex County Fair (name changed to the Delaware State Fair in 1962). The fair has always had a positive effect on the local economy. A 1996 economic impact study, the last one done, showed the fair brought about $4 million a year into the Harrington area. Annually, the fair hires
about 200 local residents as ushers, maintenance staff and ticket takers. Fair vendors also hire local people. In addition to the annual ten-day Fair in July, the fair grounds are a location for year round events, horse shows, live harness racing, flea markets, antique car shows and many other community events.

Harrington has been a harness racing town since a group of enthusiasts held a 60-day meet on the fairgrounds in 1946. The next year they formed an association called “The Harrington Raceway” and built the present day track. Today it is the oldest continuously operating harness racing track in the country. Despite the fact that it has been a fixture in Harrington for many years, the track was in trouble in the early to mid 1990’s. Purses were down and so was attendance. The raceway’s tired old facilities also played a role in the tracks downturn. All that changed when Delaware’s gambling laws were changed and the slots opened in 1996. By State Law, about 12 percent of the money from the state’s three slot casinos must be used to help improve horse racing in Delaware. In the last few years the raceway has added a new paddock for the horses, a new administration building, improved roads and parking and improved the track itself.

Harrington Raceway & Casino, a $6 million slots palace with 1,327 machines to play, attracts about 1.5 million people every 10 months. Harrington Raceway & Casino does about $10 million worth of business a month. The state gets 52 percent of that money, although only about 35 percent goes into the general fund. The rest is spent to pay for horse racing improvements and cover other expenses. Of the 48 percent they keep, 87 percent must be returned to the players in the form of winnings by state law.

Harrington Raceway & Casino has had an enormous effect on Harrington and the surrounding area.
Most of it’s 450 employees are local. The flood of people and money coming to play the slots has led to other expansions and created more restaurants and motels to the area.

Despite the development and the expectation of more to come, many residents say Harrington manages to maintain its friendly atmosphere.